What is the Unilevel MLM Plan?

Unilevel MLM plan is the easiest and the unlimited width MLM plan that will enable you to refer the downlines or the distributors in one single front line and there is no spillover in this MLM plan. Since there is no limitation, you can build unlimited width down the line.

It is almost similar to a forced matrix compensation plan wherein forced matrix the distributors can only have a certain number of downlines in their frontline, it means there is a spillover and the same is not present in the Unilevel MLM plan.

Unilevel MLM software is the MLM software application that manages this MLM plan to handle the income and compensation to be paid out to the downlines. This MLM software keeps track of all the MLM activities of the organization to easily calculate the Unilevel MLM plan calculations. 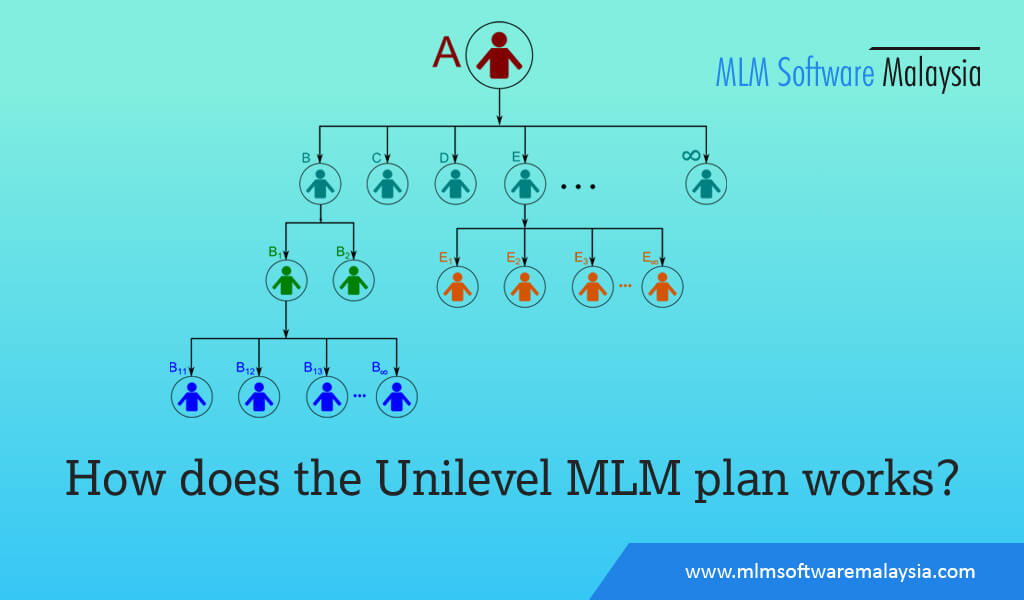 Unilevel MLM plan structure is very simple to understand. Here each distributor can sponsor unlimited downlines in their frontline. The downlines or the distributors at the same level will be paid the same commission and usually, the commission is restricted to a certain level of depth (Maybe up to 4th to 7th level deep).

The main target of the Unilevel Plan is to increase the width of the frontline by recruiting a large number of downlines in the frontline.

Here in this plan, rewards such as level commissions, incentives, and sales commissions are offered when a certain level of depth is achieved and the for the sale happened at that particular level.

In the Unilevel plan, there is no spillover and so all the distributors can have all the downlines in their frontline. The more downlines they sponsor, the commission earned will be more.

A certain percentage of business volume is at the specific levels and the decision from the MLM organization.

For example, consider 10 levels of Unilevel plan for a distributor. From 4th level to 7th level, the fraction of downline effort goes out as commission to the distributor.

Sponsor Bonus is to motivate the distributors to increase the depth by recruiting more downlines in Unilevel structure.

Fast Start Bonus is the bonus for the new recruit or new client to the Unilevel MLM. It is for any distributor for sale by anew recruit.

In the Unilevel compensation, the commission for the downline efforts and the percentage share of the business volume comes from the MLM organization.

 Because of its simple and complex-free structure, most of the MLM companies nowadays use Unilevel compensation plan as their basic plan.

 It’s very easy to apply, so always stands as the best MLM plan for any class of MLM Organization.

 The main advantage of unilevel plan is that, as there is no limit on the number of distributors one can sponsor, so more is the commission.

 Everyone is treated as same level and paid the same commission rates, rather than advancing and breaking away.

 Limitation in depth encourages distributors to build wide.
 Integration of reward bonuses at any level and customization of compensation level easy.